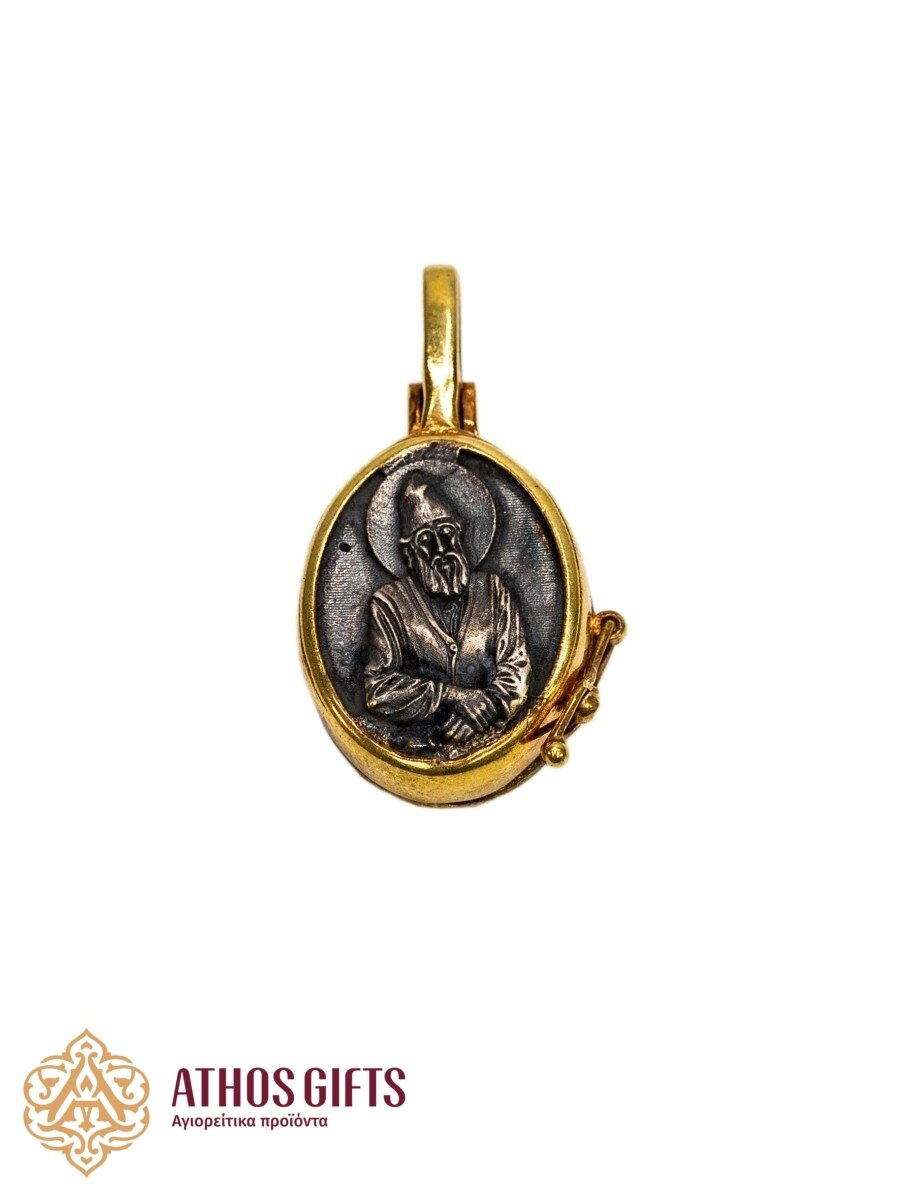 SKU JI1008
75,00 €
Sterling silver pendant with gilding with an image of the icon of Saint Paisios the Athonite
In stock
1
Product Details

The front side of the locket depicts the icon of Saint Paisios the Athonite. Inscription on the reverse: Ο Άγιος Παΐσιος (The Saint Paisios). The locket is suitable for storing incense and other small relics. It is made of sterling silver with gilded edges.

Saint Paisios the Athonite (1924-1994) is one of the most revered and beloved monks of twentieth-century Greece. The saint's entire life is a vivid example of sacrifice, concern for one's neighbor, and truly Christian love and patience. Many of our contemporaries have witnessed numerous miracles and prophecies that the saint performed during his lifetime.
Paisios was born in Cappadocia (Asia Minor) under the name of Arsenios. During the first months of his life, the family moved to Greece, settling for a year and a half on the island of Corfu. Then Arsenios' family moved to Igoumenitsa, and after that to Konitsa, where they settled.
Arsenios began to show a love for God and a predilection for the Holy Scriptures from a young age. He also sought solitude, which was the first prerequisite for his future monastic life. He was drafted into the army in 1945. Later, his fellow servicemen told of Arsenios' incredible sacrifice. He never refused anyone and always volunteered at the front line instead of soldiers who had families and children. His fellow servicemen also recalled the miracles the saint had already performed at the time: not once had he miraculously saved himself and his comrades from enemy bullets.
Immediately after his discharge from the army, the young man went to the Holy Mountain, where he received his first monastic name, Averkios. Among the brethren he was distinguished by his great love and understanding for the others, being a model of humility and obedience. In 1956, Averkios received the minor monastic schema, after which he was finally given the name that is now familiar to believers throughout the world - Paisios.
The holy elder passed away on July 12, 1994 after a long illness. The question of his canonization had been of concern to many believers since his death, for witnesses to the many miracles Paisios had manifested live to this day. Finally, on January 13, 2015, by a unanimous decision of the members of the Holy Synod of the Ecumenical Patriarchate of Constantinople, it was decided to canonize the schemamonk Paisios the Athonite as a saint.
The tomb of the saint is located at Saint John the Theologian monastery in Souroti, where thousands of pilgrims come to kneel at the last earthly resting place of St. Paisios.