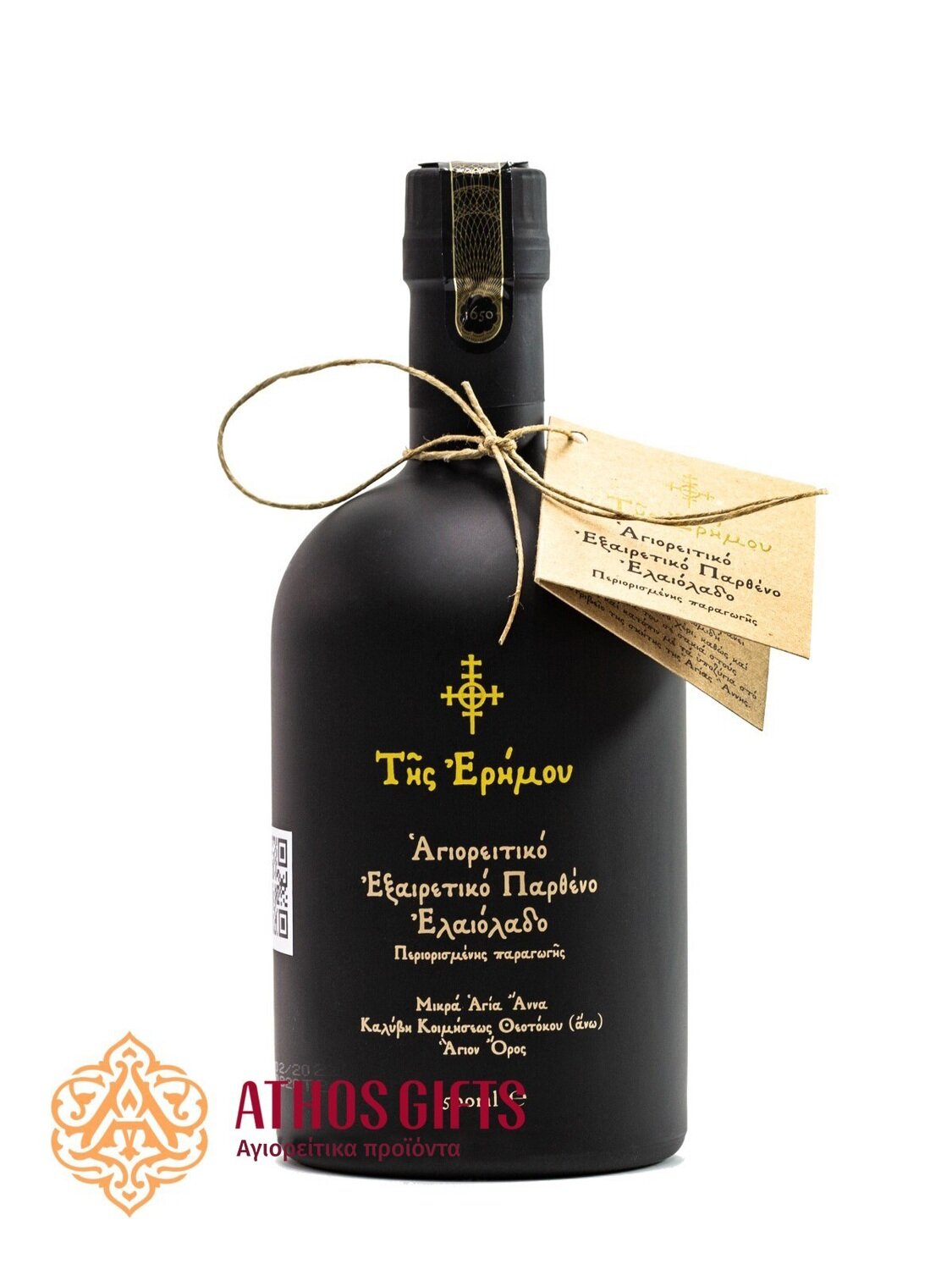 Extra Virgin Olive Oil “Της Ερήμου” (“Of desert”) is produced from olives grown in the centuries-old olive groves in Mikra Agia Anna (Little Saint Anna), the “desert” of Mount Athos. Due to its superior quality, the “Της Ερήμου» olive oil is of limited production and thus having unique characteristics.

The so called “desert” is a rocky region on Mount Athos where the combination of the unique micro-climate and the passion and love of the monks result in this rare and valuable olive oil.

It is of limited and rare production resulting in from the exceptional combination of hard labour and patience of monks with the unique climate of the region. The olives are harvested by hand and carried in sacks and baskets by the monks on their backs to the mules so as to be transported to the oil mill. The trees are watered when it rains since there is only one water spring to fulfill the monks’ needs. The monks have to make supernatural effort for the cultivation of the centuries-old olive trees. Beside that, they have planted many new olive trees in their effort to control the wilderness of the place with the help of our Holy Mother of God.

From the monks hands

The monks of The Holy Cell Of The Assumption of Holy Mother of God cultivate olive trees in this craggy landscape, in a painful and hard way which includes the meticulous and thorough olive hand harvesting as well as carrying the sacks or baskets on their shoulders, until mules can be used in order to arrive at the oil mill of the Skete of Agia Anna.

The valuable olive oil produced in this specific area is preserved in dark bottles. The profits will be spent on the restoration of the Holy Cell of the Assumption of Holy Mother of God, which was built 400 years ago. The restoration of the Holy Cell is supported mainly by this income. Τhe two monks who live there, explained that the Holy Cell was depopulated in 1972 and after some time it collapsed. The small olive grove is estimated to have been planted around 1600 AD, approximately the time the Holly Cell was founded. When, ten years ago, the two monks were granted the Holy Cell and its territory, there were 80 olive trees. Since then, they have planted themselves many new olive trees because olive oil is of the most important products on Mount Athos.

“The first olive trees were planted ages ago by the eremites who were living here under really adverse living conditions. When we came here to take care of the region ten years ago, the place was like a jungle. The terrain is tough and mostly dry and for that reason it is called “desert”, one of the monks explains. “Keep in mind that until 1970, the only available drinkable water was that of rain. There was no other option. Now we fetch water from a spring which is quite far from here. Not only do we drink from that but we water the trees we have planted, too. Nevertheless, the centuries-old olive trees are watered only when it rains. Moreover, this spring covers the needs of five more Holly Cells. The “desert” of Mount Athos comprises Mikra Ayia Anna, Katounakia, Karoulia and the Skete of Saint Basil. ”

Machinery and tractors are impossible to reach the place, so thinning out, weeding and harvesting are done by hand. The monks carry the sacks with olives on their backs until donkeys can carry them through a small path to the oil-mill.